Derek was Marjorie's black boyfriend who Marjorie showed off to the group in Series 3. As he is a personal trainer, he gets the group to do some excersie. He partners with Tania as Tania dosn't have a partner in the excercise which makes Marjorie jealous. Marjorie then gets cross at Tania and dumps Derek. After he leaves she runs after him to apologise and he says she is "nuts!". 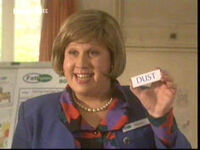 Marjorie often recommends to Pat that she tries eating some Dust and recommends different meals with dust, such as Dustburger, Full English Dust and Pain au Dust. A full list can be seen in the book Little Britain: The Complete Scripts and Stuff: Series Two.

In Little Britain Abroad, Marjorie was sent to take a FatFighters class in the USA. Like in the UK, she was very harsh to members. However unlike her UK class has a polivce officer in it who won't put up with her, which resulted in her arrest. Meanwhile, back in England, her normal class is taken by a Texan, Blanche (played by David Walliams). She, unlike Marjorie, is very friendly to the members. But it is revealed that Blanche is a member of the Ku Klux Klan and can't understand Meera either.

She adds the letter "y" to the end of member's names (eg. Pauly, Patty) except when she says "Fat Pat".

In an episode of Season 2, Vanessa Feltz visits FatFighters, after watching Marjorie insult the FatFighters members, she calls Marjorine 'a total cow' which resulted in Marjorie spitting on her face.

EastEnders star Derek Martin made an appearance during season 2/3, in which he is subject to Marjorie's onslaught of EastEnders-related jokes and questions including what would happen to most of the characters 'in the end' until he eventually made a premature departure, which Marjorie blamed on her group.

Retrieved from "https://littlebritain.fandom.com/wiki/Marjorie_Dawes?oldid=4219"
Community content is available under CC-BY-SA unless otherwise noted.